Stan Hugill wrote in his 1961 “Sea Shanties (sic) of the Seven Sea” that the earliest mention of this “stamp & go” hauling chantey is to be found in the Olmsted, F.A. 1841 book Incidents of a Whaling Voyage by F. A. Olmstead –  the published account of an 1839 voyage of the ship North America out of New London, Connecticut to hunt the whale in the grounds of the Pacific Ocean.   The chorus he gives is thus:

Many musicologists believe the song to be at least as old as 1820 and this is a discussion best left to them than in this page.  The song did make its way into other ships and into the minstrel shows of the 19th century, and is likely to be the most well known sea song today.  The verses reflect various ways imagined to punish a sailor reporting on board ship but still intoxicated, and many verses today are created on the spot by performers to reflect current topical events or simply lines to gross out the listening audience, while there are versions softened greatly for audiences of children.  Below are lines of mixed origin, from traditional to recent.

I will point out, though, that the tune/melody is actually from the Irish Gaelic folk song Óró sé do bheatha abhaile and as such dates to at least the 1740s although believed to be much older than that.  The verses have been changed to reflect political views over the generations, but see the following note:

Joyce, Patrick Weston (1909). Old Irish Folk Music and Songs. London (Dublin): Longmans, Green and Co. (Hodges, Figgis & Co.). pp. 121, 130. “The following 34 airs (to “She’s the dear Maid to me”) were sent to me from time to time during 1884 by Mr. Francis Hogan of South Lodge, Brenormore, near Carrick-on-Suir, a good musician and a great enthusiast in Irish music and songs. He must have been then well over seventy years of age. Some of these he wrote from memory, and others he copied from MSS.”
p. 130 “275. ORO, ’SE DO BHEATHA A BHAILE: ORO, WELCOME HOME! A Hauling-home Song. The “Hauling home” was bringing home the bride to her husband’s house after marriage. It was usually a month or so after the wedding, and was celebrated as an occasion next only in importance to the wedding itself. The bridegroom brought home his bride at the head of a triumphal procession—all on cars or on horseback. I well remember one where the bride rode on a pillion behind her husband. As they enter the house the bridegroom is supposed to speak or sing:—
“Oro, sé do bheatha a bhaile, is fearr liom tu ná céad bo bainne
Oro, sé do bheatha a bhaile, thá tu maith le rátha.
Oro, welcome home, I would rather have you than a hundred milch cows:
Oro, welcome home, ’tis you are happy with prosperity [in store for you].”
“Here is Mr. Hogan’s note on this air:—“This song used to be played at the ‘Hauling Home,’ or the bringing home of a wife. The piper, seated outside the house at the arrival of the party, playing hard [i.e. with great spirit]: nearly all who were at the wedding a month previous being in the procession. Oh, for the good old times!” This tune is called in Stanford-Petrie an “ancient clan march”: and it is set in the Major, with many accidentals, but another setting is given in the Minor. I give it here as Mr. Hogan wrote it, in its proper Minor form. In several particulars this setting differs from Dr. Petrie’s two versions. It was a march tune, as he calls it: but the March was home to the husband’s house. Dr. Petrie does not state where he procured his two versions.” 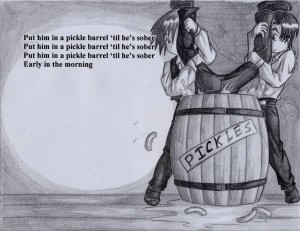 Shave his belly with a rusty razor.  3x

Put him in the long boat till he’s sober.

Lock him in the guard room ’til he gets sober.

Make him the captain of an Exxon tanker.

Put him in the scuppers with a hose-pipe on him.

Pull out the plug and wet him all over.

Tie him to the taffrail when she’s yardarm under.

Tie his pecker in a rolling half-hitch.

Put him in charge of an off shore oil rig.

Heave him by the leg in a runnin’ bowline.

Put ‘im the bilge and make ‘im drink it.

Give ‘im a dose of salt and water.

Shave his balls with a rusty razor.

Give ‘im a hair of the dog that bit him.

Give ‘im a taste of the bosun’s rope-end.

Soak him in oil till he sprouts a flipper.

Put him in bed with the captain’s daughter.

Have you ever seen the captain’s daughter?

Oh, my, what an ugly daughter!!

Lock ‘im in a room with Dolly Parton.

What do you do with Dolly Parton?