This is actually a broadside ballad equally popular in both Ireland and Scotland in antiquity before becoming a mainstay – and often overdone – in the traditional music genre. It allegedly was the most popular song in Scotland before Robbie Burns wrote Auld Lang Syne (1788). The melody is originally a church hymn from late Medieval times called “Kingsford”, and passed into popular use as a folk dance known as “The Peacock” in the early to mid-1600s, (it has also survived as a Morris Dance tune, sometimes of that name, sometimes other regional titles) and the song/lyrics – known then as “Guidnight, and joy be wi’ you a’” – first seem to appear around the same time in part while as a complete entity allegedly around 1700 while the first time it is in print in its entirety is 1770 – oral folk tradition for ya!  As a tune in the 18th century, The Peacock was known as a fife/drum march and a melody for various folk songs of greater or lesser social appropriateness aside from “The Parting Glass”; much like Francis Scott Key writing some ten or so different poems to the tune of “Anacreon in Heaven”, the most famous one being the Star Spangled Banner (US National Anthem), Robert Burns was taken with the tune of “The Peacock” and wrote many different songs with that melody being the platform such as “Jame’s Farewell” (real title is “The Farewell To the Brethren of St. James’ Lodge, Tarbolton” written in 1786).

Traditionally it is a song for the end of a performance or a night at the pub together or other social gatherings, but more recently it has become commonly used to commemorate the passing of a comrade. 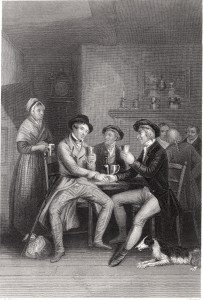 Of all the money e’er I had,
I spent it in good company.
And all the harm I’ve ever done,
Alas! it was to none but me.
And all I’ve done for want of wit
To mem’ry now I can’t recall
So fill to me the parting glass
Good night and joy be with you all

If I had money enough to spend,
And leisure time to sit awhile,
There is a fair maid in this town,
That sorely has my heart beguiled.
Her rosy cheeks and ruby lips,
I own she has my heart in thrall,
Then fill to me the parting glass,
Good night and joy be with you all.