A very popular song that has many versions and has shown up in popular culture beyond its halyard chantey roots. Stan Hugill states that it was used primarily for work on the halyards (“halliards”); the long, slow task of hoisting the heavy canvas sails on their yards and spars. The first version is taken from the album “Across the Western Ocean” of John Roberts and Tony Barrand.  The second version I had first heard on the 1977 album “Steady as She Goes” (Louis Killen, Jeff Warner, Gerret Warner & Fud Benson), and then a longer version by Oscar Brand – after reading the various yarns and memoirs of sailors, one could easily see the less savory version being the most often sung shipboard.

Stan points out that “to blow” here is to strike; the chief mate on Blackballer ships often referred to as the “Blower” while the second mate was called the “Striker”. 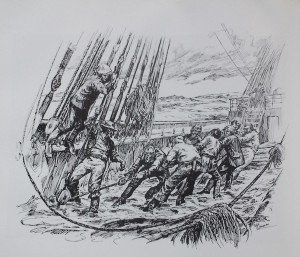 This charming flash packet, she said unto me:
There’s a dandy Black Baller just ready for sea.

So I packed up my sea-chest, and I signed on that day,
And with that flash packet I spent my half-pay.

And when that Black Baller was ready for sea,
Oh, it’s then that we went on a hell of a spree.

There’s tinkers and tailors, and soldiers and all,
They ship as prime seamen upon the Black Ball.

It’s “Foretops’l halyards!” the mate he will roar,
And, “Lay aloft smartly, you son of a whore.”

Yes, it’s larboard and starboard an deck you will sprawl,
For Kickin’ Jack Williams commands this Black Ball.

As soon as you’re clear over old Mersey Bar,
The mate knocks you down with the end of a spar.

And as soon as the packet is well out to sea,
Then it’s cruel, hard usage of every degree.

She drank down a pint and I swallowed a quart
She listed to starboard, I listed to port.

It was up in her quarters she piped me aboard
And there on her bed I cut loose with my sword!

Ah but just as me cutter was forging ahead
She shouted, “My husband!” and jumped outta bed!

He was seven foot tall, he had a chest like a horse
And right for me jawbone he plotted his course.

He loosened my rigging, he kicked in my stays
I flew down the stair like a ship on the ways!

I chanced on a packet what happened on by
And when I awoke I was bound for Shanghai!

So come all you young ladies what follows the sea
Don’t never take heed of what fair damsels say!