A rousing, room-filling, full-throated song consisting of a traditional tune with the song lyrics by Tommy Makem. 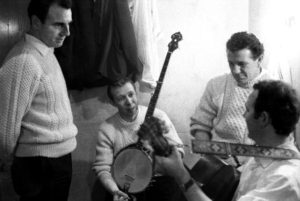 Oh, Spain it is a gallant land where wine and ale flow free
There´s lots of lovely women there to dandle on your knee
And often in a tavern there we´d make the rafters ring
When every soldier in the house would raise his glass and sing