A.L. Lloyd was known for this song; so, too, was Joan Baez, Ewan MacColl, and others… But amongst our sea music peers, this is a “Cliff song”.  It dates to the 17th century, s among the songs collected by Samuel Pepys. and appears in the folk tradition in myriad names such as “A Warning For Married Women”, “The Fair Maid of Bristol”, “The Demon Lover”, and even “The Distressed Ship’s Carpenter”… With as many melodies to sing them to!  It tells the tale of a woman who had loved a sailor but wound up marrying a carpenter (house or ship), later to be approached by either the former lover (sailor) or the devil in the form of that former lover… In either case, he woos her away with the promise of a higher standard of living and she leaves even her infant behind… But the story turns sour and our lady finds herself facing death and thence hell. 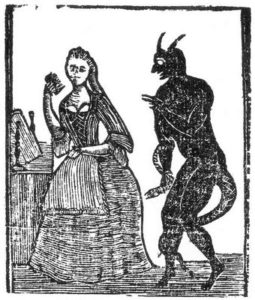 Melody as sung by Cliff Haslam.

Well, if you could have married the king’s daughter dear
I’m sure you are to blame
For I am married to a house carpenter
And find him a nice young man

Oh, will you forsake your house carpenter
And go along with me?
I’ll take you to where the grass grows green
To the banks of the salt, salt sea

Well, if I should forsake my house carpenter
And go along with thee
What have you got to maintain me on
And keep me from poverty?

Six ships, six ships all out on the sea
Seven more upon dry land
One hundred and ten all brave sailor men
Will be at your command

She picked up her own wee babe
Kisses gave him three
Said, “Stay right here with my house carpenter
And keep him good company”

Well, they’d not been gone but about two weeks
I know it was not three
When this fair lady began to weep
She wept most bitterly

Ah, why do you weep, my fair young maid
Weep it for your golden store?
Or do you weep for your house carpenter
Who never you shall see anymore?

Well, they’d not been gone but about three weeks
I’m sure it was not four
Our gallant ship sprang a leak and sank
Never to rise anymore

What hills, what hills are those, my love
That rise so fair and high?
Those are the hills of heaven, my love
But not for you and I

And what hills, what hills are those, my love
Those hills so dark and low?
Those are the hills of hell, my love
Where you and I must go