This is one of the archetypal Irish drinking songs that in fact is English in origin; Singer/instrumentalist/folk historian Brian Peters has found it dating to around the 1670s/80s in England where it lacked a chorus and had some thirty verses. This song has branched its popularity from the public house to ship board to sports clubs to stage and television; the chorus and the shorter version of the song we all know seems to have developed in the late 19th century.  With each culture there is a claim of origin for popular folk songs that usually fold with proper research… a fairly recent comment is that it was originally a German song but this has been fairly well dashed and what is heard in German is simply a translation of the popular song for their audiences.  It is often parodied and within the “plastic paddy” genre it has become an anthem and degenerated a bit.

We present an example in this vein… The traditional four claps after the first line of the chorus had given way to stomping the same, then various toasts/oaths such as “God Bless The Pope”, or “To Hell With The Queen”… but someone, somewhere, began to shout such things as “Rise Up Yer Kilt” and, more famously, ‘Show Us Yer Tits”.  This last one became common within our Monday night crowd during the later 90s when one evening a lovely couple all attired in red came for their anniversary dinner at the Gris.  Afterwards they seated themselves in the front of the band (Cliff, Paul, and Joseph in those days), happily singing along and sucking down their booze.  When this song began, the husband began to whisper something in the ear of his wife, she giggles a lot, and come the third time the chorus came around the woman dropped her sweater, yanked down her red tank top, and wiggled a pair of delectable breasts at Joseph within four feet of his face!  The band cracked up, and a tradition was born!  We don’t sing the song every week, but when we do cries of “show us yer tits!” are inevitable and often many a lovely lady will do just that, sometimes competing for who does it the most often or shows them for the longest moments.  We always call for cameras and other recording devices to be switched off and put away so that no one will be compromised later on, and there are some nights that it simply isn’t right to sing, so no promises. 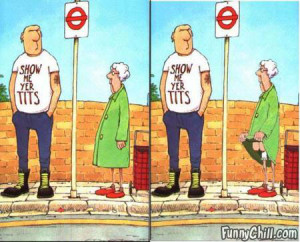 I’ve been a wild rover for many a year
And I spent all my money on titties* and beer,
And now I’m returning with gold in great store
And I never will play the wild rover no more.

I went to an ale-house I used to frequent
And I told the landlady my money was spent.
I asked her for credit, she answered me “nay
Such a custom as yours I could have any day.”

I took from my pocket ten sovereigns*** bright
And the landlady’s eyes opened wide with delight.
She said “I have whiskey and wines of the best
And the words that I spoke sure were only in jest.”

I’ll go home to my parents, confess what I’ve done
And I’ll ask them to pardon their prodigal son.****
And if they caress (forgive) me as ofttimes before
Then I never will play the wild rover no more.

*** a British mint gold coin equal to one pound sterling, more or less.