Not exactly your Rod Stewart version.  I understand that some people consider this song to be Liverpool’s unofficial national anthem.  I have heard several variants of this song, some of which have rather filthy verses undoubtedly composed by the performers themselves; we, ourselves, have a fan base that likes to add less-than-family-friendly calls and words to the song as we perform it! Apparently the song has not made it to most folk-music collections and remains more in the oral tradition.  The version below comes from the singing of John Roberts and Tony Barrand.  The earliest recording of the sing I am aware of was by Peter Kennedy on October 10, 1953, although it is known to be older, and it quickly became an unofficial anthem for Liverpool.  This public-domain ditty was sampled by the Beatles on their 1970 album “Let It Be” – but be aware that they did NOT compose it… The recent movie Pirates of the Caribbean – Dead Men Tell No Tales, erroneously credits The Beatles with having composed and thus owning the song… Don’t let any agent from ASCAP try to strong-arm you, and if need be, direct him to this page. 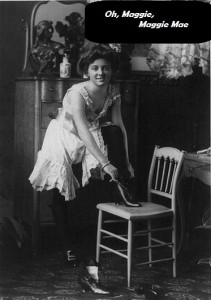 Come gather round, my sailor lads, and listen to my plea,
And when you’ve heard my tale you’ll pity me,
I was a bloody fool in the port of Liverpool,
The first time that I came home from sea.

We was paid off at the Home, from the port of Sierra Leone,
And three pounds ten a week, it was my pay,
With a pocket full of tin, I was very soon taken in
By a pretty girl with the name of Maggie Mae.

Chorus:
Oh Maggie, Maggie Mae, they have taken her away,
To walk upon Van Diemen’s cruel shore,
She robbed so many sailors, and dosed so many whalers,
And she’ll never roam down Lime Street any more.

Oh, well do I remember when I first met Maggie Mae,
She was cruising up and down old Canning Place,  {Without her drawers on!}
With a figure so divine, just like a frigate of the line,
And me, being a sailor, I gave chase.

Next morning I awoke, I was flat and stony broke,
No jacket, trousers, waistcoat could I find,
When I asked her where they were, she said: My very dear sir,
They’re down in Kelly’s Pawnshop, Number Nine.

To the pawnshop I did go, but no clothes there could I find,
And the police came and took my girl away,
And the judge he guilty found her of robbing a homeward-bounder,
And he paid her passage back to Botany Bay.