One of the first sea songs/chanteys I ever learned from the singing of WW1 US Navy Bosun Mr. Urial (? I think that was his name… I was around 10 yrs old and I almost never called him by name but simply said “Hello, Sir”).  He sang several songs that he had learned while working aboard a U-boat chaser and every one of them were off-colour and sometimes quite bawdy.  I don’t recall all the verses he sang but a couple of years later I obtained a copy of “Heart of Oak” by the X-Seamans Institute… Bernie Clay sings the lead.

There are at least several chanteys/sea songs by the name of “Fire Down Below” all with a similar theme; the fire down below is not that the vessel is on fire but rather the individual or group referred to is in a state of passion = ie: mostly horny, but sometimes an angry passion. You can let your imagination fill in the blanks!  Stan Hugill states that this was a pumping chantey (he preferred the spelling of shanty) and later a capstan chantey but there’s another source (Mr. Urial) that suggested that it was sometime’s utilized as a rowing chantey. Hugill goes on to describe it as one of the last shanties sung aboard a British squarerigger. He was the shantyman who sang it on the four masted barque Garthpool just before it wrecked on Ponta Reef, Cape Verde Islands in October 1929. 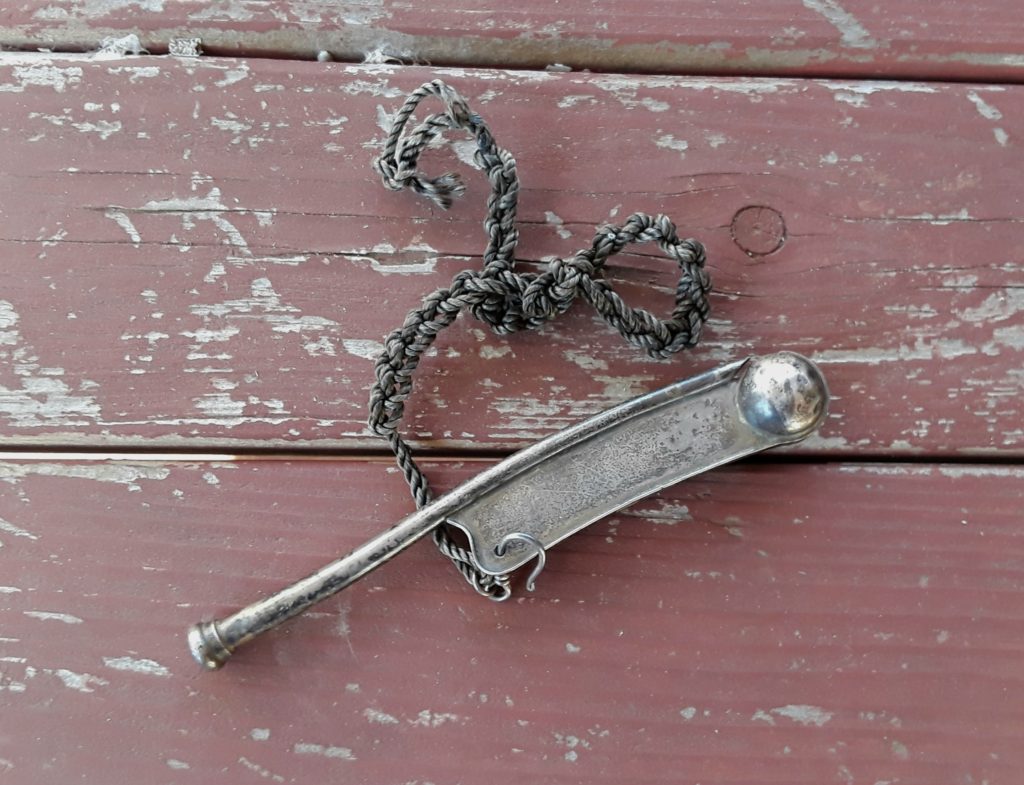 The silver bosun’s pipe used by Mr. Urial during his time in the Navy. His wife snatched the lanyard as “being too pretty to let go” when he gave me his pipe, or call, saying that none of his family would care about it.

She was just a village maiden with her red and rosy cheeks
To me way, hay, hee, high, ho!
She went to church and Sunday school and sang those anthems sweet
And there’s fire down below!

Well the parson was a misery, so scraggy and so thin,
Says he, “You wretched shellbacks, if you lead a life of sin,”

He took his text from Malachi and swung a weary face,
I took French leave and sailed away, and then I fell from grace.

‘Cause the parson had a daughter; she was sweet as sugar candy,
I says to her, “Us sailors would make lovers neat and handy.”

She set to me, “You sailors is a bunch o’ bloody liars,***
You all get drunk and fall asleep and leave me still on fire!

She was a very naughty gal, this parson’s only daughter,
She’d go on down unto a creek to wash her locks** in water.

There’s fire in the cabin, boys, and in the galley too,
But there’s no fire in the fo’c’sle and so cold is the crew.

* The silver call hanging around the neck and utilized by the ship’s boatswain or “bo’sun” (and his mates) was named a “pipe”, not a “whistle”.  The sounds he made upon it were referred to as “calls” although I’ve seen some old sailor writings refer to them as “tunes”.