I composed this song in February of 2013 for a now defunct recording project that was to focus on songs relating to the Connecticut River and shoreline of the state of CT, largely historical.  My inspiration was this… some years ago, while working on an unrelated research project, I came across a rather old archived newspaper clipping of an interview with an aged man who had apparently been a captain of a vessel that ran up and down the Connecticut River, bringing people and goods from point A to B in his smaller vessel, as larger vessels would have trouble getting over the sandbar at the mouth of the river in Old Saybrook… Or sometimes they would make it, but would stop to unload in Pettipaug, now called Essex, CT.  He went on to relate how some other deep sea mariners who he knew would occasionally urge him to consider leaving behind his “river running” (my words) in favour of going to sea with them where he could earn a great deal more money in “less time”.  He took a pass, being quite comfortable with his choice.  I thought of this as I wrote the song, but I set it in the period between the American Revolution and the War of 1812, for a more historical flavour.  The song isn’t of a man afraid of going to sea but of a practical man in the “land of steady habits” quite content with his life and steady work, seeing his lot in life as being essential.

2) But my livin’ and home ain’t the sea.
The Connecticut River for me!
Me wife and me children, how happy they be,
When I safely return to my home at the quay. 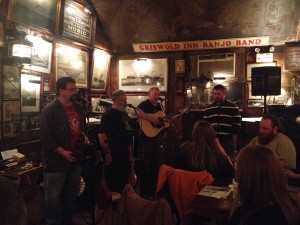 * Chink = vernacular term meaning money, specifically at a time when cash was only in specie or coins of gold, silver, copper, and the pleasant sound it made when jingled.

** Seth Overton was a businessman with a shop and sail loft in Portland, CT, and a wharf in Middletown, CT, across the river.  He was involved in shipbuilding, including the sloop of war USS Connecticut (a small class frigate, or corvette, much like the later cruisers) in 1799.  Pettipaug was the name for the town of Essex, CT, further down river, and it seems a common drop off point for cargo and passengers who might then embark on smaller craft to make their way up river towards Middletown and Hartford. At the turn of the 19th century it was also the location of thriving shipbuilding to be utilized for privateering against the British and for running goods through the wartime blockade.  In the case of this song, it is presumed that the story is being related before the War of 1812.

*** or a pinque – a light schooner with a narrow stern and somewhat shallow draft, often used either for fishing or cargo transport along rivers and shorelines.  Not necessarily the most common craft along the CT River but they were indeed there.

**** Stepney Parish was the old name for modern day Rocky Hill, a portion of Wethersfield, CT back in the day.  After 1700 and until the days of rail, it was de facto the landing for shipping to Wethersfield, Newington, &c.