This is a wonderful ditty written by the even more wonderful Tom Lewis.  It has taken on a life of its own… The Ancient Mariner Chanteymen used to sing it often and once, during a performance, one of the Ancient Mariners drummers (Todd Kennedy) made the quip in my ear “and if you see a sailin’ ship it might bite yer ass!”  I was quite amused and began to tease that line into our Monday night shows where it caught like a brush fire and took on a life of it’s own, bleeding over into other venues, usually reserved for the very last chorus and its repeat – I’m so very sorry, Tom! 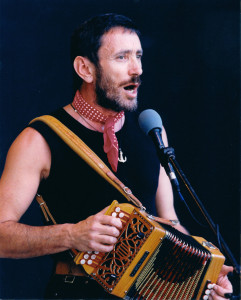 My father often told me, when I was just a lad,
A sailor’s life was very hard, the food was always bad,
But now I’ve joined the navy, I’m on board a man-o-war,
And now I find a sailor ain’t a sailor any more!

Chorus:
Don’t haul on the rope, don’t climb up the mast,
If you see a sailing-ship it might be your last,
Get your ‘civvies ready for another run-ashore,
A sailor ain’t a sailor, ain’t a sailor any more!

The ‘killick’ of our mess, he says we’ve had it soft,
It wasn’t like this in his day, when he was up aloft,
We like our bunks and sleeping-bags but what’s a hammock for?
Swinging from the deckhead or lying on the floor?

They gave us an engine that first went up and down,
Then with more technology the engine went around,
We’re good with steam and diesel but what’s a mainyard for?
A stoker ain’t a stoker with a shovel any more!

They gave us an Aldiss Lamp, we can do it right,
They gave us a radio, we signal day and night,
We know our codes and ciphers but what’s a ‘sema’ for?
A ‘bunting-tosser’ doesn’t toss the bunting any more!

They gave us a radar set to pierce the fog and gloom,
So now the lookout’s sitting in a tiny darkened room,
Loran does navigation the Sonar says how deep,
The Jimmy’s 3 sheets to the wind, the Skipper’s fast asleep.

Two cans of beer a day, that’s your bleeding lot!
But now we gets an extra two because they stopped The Tot,
So, we’ll put on our civvy-clothes and find a pub ashore,
A sailor’s still a sailor, just like he was before!

2 thoughts on “A Sailor Ain’t A Sailor”