Recently Tim and I backed up a friend of ours who was presenting a rum tasting by singing drinking songs during the mixing of different cocktails. It occurred to us that for all of the references to rum and grog enjoyed by sailors, we knew damned few songs about rum… Sure “All For Me Grog”, and then “Roll The Ol’ Chariots” begins with a reference…

So I began to dig for some songs… Here is one of cloudy origins but I’ll give you what I understand, happy to be corrected should sources be cited.

In 1882 two gents took a suspected older English ditty melody, wrote some lyrics, and then arranged the melody. Edward Harrigan and Dave Braham then presented it in the vaudeville circuit and it gained some popularity, catchy as the tune is, under the name “Salvation Army”. (I’ll provide the lyrics to this towards the end of this page) The significant part really is the chorus:

Away, away with rum and gum!
Here we come; hear the drum!
A regular proper lum, tum, tum,
As we joined the army, oh!

You begin to see the inspiration, yes? With the variant clubs and organizations that made up the general anti-alcoholic beverage movement collectively referred to as the Temperance Union (Women’s Christian Temperance Union, Salvation Army, et al) that would eventually lead up to the era of Prohibition, parades and rallies were the norm and popular melodies conscripted with new lyrics to fit the message meant to be broadcast… Just as political gatherings and rallies did. It seems that this song was appropriated in this manner, but just as quickly elicited parodies among the drinking crowds. In 1914 the new Secretary of the US Navy abolished the use of “alcoholic liquors on board any naval vessel, or within any navy yard or station…” and the local newspapers made quite the story about this.  The New York Tribune published cartoons of Sec. Daniels as “Sir Josephus, Admiral of the USS Grapefruit Pinafore” and with one of them these lyrics to the melody of this essay…

Away, away with sword and drum,
Here we come, full of rum
Looking for something to put on the bum
In the Armored Cruiser Squadron

In the 1915 edition of “Michigan’s Favourite College Songs” the song appears under the title “The Song of the Temperance Union” and, I am told, was also popular on the Yale Campus (still waiting for the evidence on that). The song waned in popularity as these things do but regained ground when “discovered” about the time of the folk revival the 1960s, with many more tongue-in-cheek versus added to taste and absurdity.

The version of the song we sing is here with no claim to historical accuracy simply because it is part of the folk process and variations abound.

THE SONG OF THE TEMPERANCE UNION

We’re coming, we’re coming, our brave little band
On the right side of temp’rance we do take our stand.
We don’t use tobacco, because we do think
That the people who use it are likely to drink

We never eat fruitcake because it has rum,
And one little slice puts a man on the bum.
Oh, can you imagine the pitiful sight
Of a man eating fruitcake until he gets tight?

We never eat *cookies because they have yeast,
And one little bite turns a man to a beast.
Oh, can you imagine the utter disgrace
Of a man in the gutter with crumbs on his face?

We never drink grog for that leads to sin,
One little sip and a man starts to grin.
Oh, can you imagine a sorrier sight
Than a man drinking grog and singing all night? 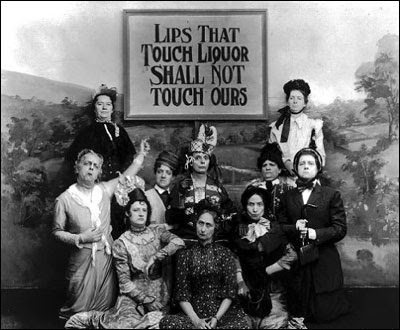 Oh, Cleveland and Folger they went out to fight,
And Cleveland hit Folger with all his might,
The winner he lives in Buffalo,
And the loser’s joined the Salvation Army, oh!

CHO
Away, away with rum and gum!
Here we come, hear the drum!
A reg’lar proper lum tum-tum,
As we join’d the army, oh!

I’ll give you a pointer that’s on the square,
The guy in the middle’s a millionaire,
He does this for fun, ’cause he’s stuck on the show,
And he follows the Salvation Army, oh!

Ol’ Jonahy he lived away down in a whale,
In a little back room very close to the tail,
Don’t give it away, for he’s out on bail,
And he sings in the Salvation Army, oh!

Spinola he started a rousing big scheme
To heat up the city and county by steam,
He’s block’d up the streets I would have you to know,
And he’ll blockade the Salvation Army, oh!