“Silver Threads Among the Gold,” was a lovely, sentimental poem written by Eben E. Rexford around 1866. The man made a living by writing verse and flower and garden articles for magazines.  Later, H. P. Danks, composer of the music for “Silver Threads,” wrote to him requesting words for a song. Rexford dug into his scrapbook and revised one of his poems – “Growing Old.”  The song was copyrighted in 1873 and almost immediately seems to have inspired this parody as it appears in print later that very year. 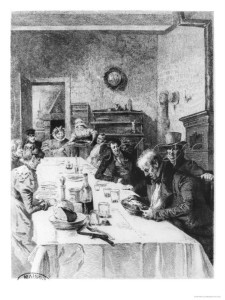 In the boarding house I lived in
Everything was growing old
Silver hairs amongst the butter
And the cheese was green with mould.
When the dog died we had sausages
When the cat died catnip tea (catnip tea…)
When the landlord died I left there
Spare ribs were too much for me . (Too much for me!)

Someone handed me a partial second verse, he not recalled the first half.  If by chance you should, please do send it along!

8 thoughts on “At The Boarding House”