This is one of those songs frequently dismissed as fun but insignificant from a historical point of view, and we sing it really for the saucy humour and to remind people-of-the-double-standard that women can be just as willingly wild and carefree as the men.  However, A.L Lloyd had written that this very song stems from the mid-18th century (to be found in a song book of 1750 called “Charming Phylis’ Garland” – let me know if you get your hands on a copy??) and reached high popularity in England by the 1760s!  Lloyd goes on to tell us that the Isle of Wight had, long ago, been a “harbour of smugglers, and cheap liquor” leading “to prodigious drinking. It is pleasant to think that the Isle of Wight, now chiefly famous as the home of the snooty Royal Yacht Squadron, once rang with the laughter of bouncing Sally and her mates.” 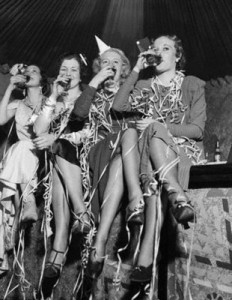 Then in comes bouncing Sally, her cheeks as red as blooms
Move up me jolly sisters, and give young Sally some room
For I will be your equal before the night is out!
These four drunken maidens, they pushed the jug about.

There’s woodcock and pheasant, there’s partridge and hare
There’s all sorts of dainties; no scarcity was there.
There’s forty quarts of beer, me boys, they fairly drunk them out!
These four drunken maidens, they pushed the jug about.

But up comes the landlord; he’s asking for his pay.
It’ a forty pound bill, me boys, these gals have got to pay.
That’s ten pounds apiece, me boys, but still they wouldn’t go out!
These four drunken maidens, they pushed the jug about.

Oh where are your feathered hats, your mantles rich and fine?
They’ve all been swallowed up, in tankards of good wine.
And where are your maidenheads, you maidens frisk and gay?
We left them in the alehouse; we drank them clean away!