This song was a pumping chantey although Stan Hugill wrote that it was more popular as a “stamp and go” capstan chantey, much like “What Do You Do With A Drunken Sailor”.  This song is an example of many that crossed into use on land either as a work song in the cotton fields or at work along the railways.  A “navvy” was a term applied to sailors who found work on the railways when unable to find it at sea.  The older version of the song does not refer to a navvy but instead uses a racist term I prefer not to perpetuate in cases such as these.

We used to sing it far too up-tempo for a real work song, for the sake of the crowd.  Of late we’ve taken inspiration by the singing of John Roberts, slowing the speed down a bit and adding instrumentation.  Verses 3 and 8 were composed by Joseph one evening on the fly many years ago; they were written down and stuck.  Verse 6 came from a bawdy poem often recited by a long time friend of ours, Mark Bosse.  There are certainly many more verses, some old, some new. 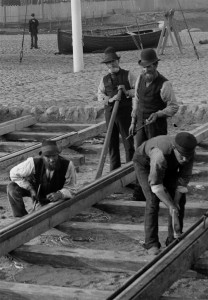 1) Oh, hand me down me riding cane,
For I’m off to see Miss Sally Jane.

Chorus:
With a hog-eye
Railroad navvy with his hog-eye
Row the boat ashore with a hog-eye, oh
She wants the hog-eye man

2) Now, it’s who’s been here since I’ve been gone,
But a railroad navvy with his sea boots on.

3) I spend me money, I do as she please,
But another Jack’s here while I’m on the seas.

4) You see Sally in the garden, shelling peas,
Her golden hair hanging down to her knees.

5) Eliza’s in the parlor, sitting on his knee,
Kissing her sailor come home from sea.

6) There’s Paul in the bathroom, sitting on the can,
Gently beating on his little old man.

9) It’s on a hog ship with a hog-eye crew,
Hog-eye mate and a skipper too.