This song is difficult to date for there have been several people who claim it as their composition and yet it can be found in one version or another dating to the mid-1800s.  It can be found in such books as “American Sea Songs & Chanteys” c.1948, “Oxford Book of Sea Songs” c.1986,  “Iron Men and Wooden Ships” c. 1924, “Shantymen and Shantyboys” c.1951.   The text was originally a poem composed by Charles Mackay on 26 May 1858; while homeward bound from America as a passenger on the Europa. Stan Hugill, who calls it ‘the most famous homeward-bound song of them all’…Used both at the pumps and the capstan.  It was easily added to and bent to the desires of the singer, thus “Rolling Home To Dear Old England”, “…Merry Old England”, “… “Old Caledonia”, “… Dear Old Ireland”, &c, &c, &c.   The melody bears a marked resemblance to the tune used for the Irish rebel dirge “Kevin Barry” dated to 1920.

The version below is how it is presented by Paul and by Tim.  For a long version, I suggest this link to Mudcat 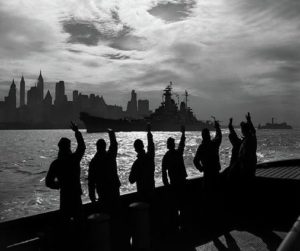 Call all hands to man the capstan
See the cable running clear
Heave away and with a will, boys
For New England we will steer