This is a song that Tim often uses to bridge between larger songs.  The actual origins of this song are vague but it is known to have become popular amongst soldiers during the First World War, and it is made mention of by James Joyce in “Ulysses” and “Finnegan’s Wake”.  The actual lyrics vary according to who is singing it for, as is part of folk music, it is more about the expression of the person delivering it than the preservation of an original set of lyrics. 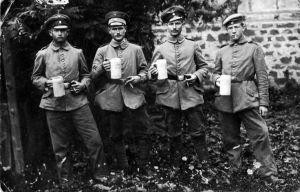 We were drunk last night.
We were drunk the night before,
We’re gonna get drunk tonight
like we’ve never been drunk before,
For we are the soldiers of the Royal Artillery!

Chorus
Singing Glo-ri-ous! Vic-to-rious!
One keg of beer between the four of us!
And glory be to God that there are not any more of us;
For one of us could drink the blooming lot!

1 thought on “We Were Drunk Last Night”