This song first appeared in the 1702 ballad opera “Love in a Village”, supposedly using the melody of an older song.  The lyrics changed as the song’s popularity caused it to be molded into use in later ballad operas, either to accommodate the new use for the storyline or for popular political leanings, thus also becoming used in common propaganda; much like many other tunes so well liked in their day, it became a plate upon which to serve verse composed to fit.  It appears in “The Fashionable Lady” (1730), “The Devil to Pay” (1732), “The Quaker’s Opera” (1728), among others, was printed in various songsters of the time with the 1782 “The Convivial Songster” seemingly particularly popular, and the melody has made it’s way into use for other popular folk songs such as “Here’s A Health Unto Our Master”.  Louisa Jo Killen (formerly Louis Killen) had collected an 1830’s version called “The Jolly Grinder”, and wrote “set in the iron and steel industry of the English 1830’s, was part of a general reaction to the advocates of temperance, who seemed to be determined to remove every small pleasure from a worker’s existence. Paraphrase of the period: “Work is the curse of the drinking classes.” May the Moral Majority take note.” 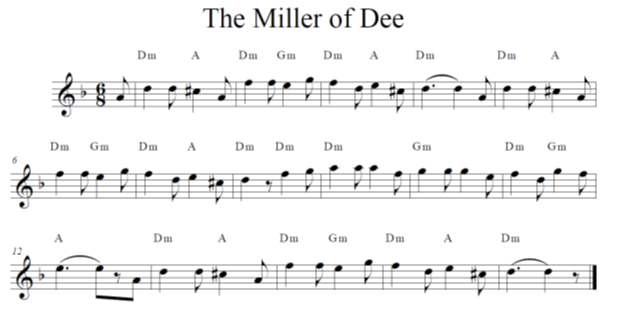 There was a jolly miller once liv’d on the river Dee ;
He work’d and sang from morn till night, no lark so blithe* as he.
And this the burden of his song for ever us’d to be–
I care for nobody, no, not I, if nobody cares for me.

The reason why he was so blithe he once did thus unfold**:
The bread I eat my hands have earn’d; I covet no man’s gold.
I do not fear next quarter-day***; In debt to none I be.
I care for nobody, no, not I, if nobody cares for me.

A coin or two I’ve in my purse, to help a needy friend.
A lit-tle I can give the poor, and still have some to spend.
Though I may fail, yet I rejoice, another’s good hap**** to see.
I care for nobody, no, not I, if nobody cares for me.

So, let us his example to take, and be from malice free;
Let every-one his neighbour to serve, as serv-ed he’d like to be.
And merrily push the can about and drink and sing with glee;
If nobody cares a doit**** for us, why not a doit care we.

*** Think tax day, or for more detail, click this link.

**** Luck, lot, or circumstance.  Good hap, mishap, happen, haphazard, mayhap are examples of the use of hap in various contexts.

***** a small Dutch coin worth perhaps half a cent.