Rick has a wonderful WW1 program he does for historical societies and similar venues in which he includes this British music hall that had become extremely popular among the soldiers of that war, forever being associated with it.  The song was, according to legend, written for a 5 shilling bet and performed the following night at the local music hall. It was written by Jack Judge on 30 January 1912 and Henry James “Harry” Williams also gets credit while he apparently did not contribute to the actual composition. 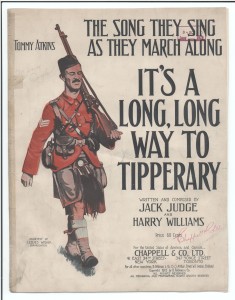 Up to mighty London came an Irishman one day.
As the streets are paved with gold sure, everyone was gay,
Singing songs of Piccadilly, Strand and Leicester Square,
Till Paddy got excited, then he shouted to them there:

Paddy wrote a letter to his Irish Molly-O,
Saying, “Should you not receive this, write and let me know!”
“If I make mistakes in spelling, Molly, dear,” said he,
“Remember, it’s the pen that’s bad, don’t lay the blame on me!

Molly wrote a neat reply to Irish Paddy-O,
Saying “Mike Maloney wants to marry me, and so
Leave the Strand and Piccadilly or you will be to blame,
For love has fairly drove me silly: Hoping you’re the same!”

It’s a long, long way to Tipperary, but my heart’s right there!