From the book “Folk Songs of Old New England” we learn that this chantey was “sung by Capt. Charlton L. Smith, master mariner and yacht master since 1889, who remembers the chantey as it was sung in deep water ships, aboard which he sailed as ‘chips,’ or ship’s carpenter.  During his last eight years at sea he served as an officer.  This is a short-drag chantey and was used mainly for tightening the sheet.  The last word ‘Joe’ was the moment for all hands to haul together.  Additional verses were added by the chanteyman until the duty was done to the mate’s satisfaction.  This chantey is thought to have appeared on Yankee ships sometime between 1812 and the Civil War, although it was known much earlier among British sailors.”

Stan Hugill calls this a “tack and sheet” chantey, “used mainly for hauling aft the foresheet after reefing the fores’l.”  It’s one of those crowd-pleasers and the couplets that form each verse can easily be improvised and go on ad nauseum.

King Louis was the king of France before the revolution.
And then he got his head cut off; it spoiled his constitution.

Now once in me life I married a wife; her name was Kitty Flanagan.
She stole me watch, she took me knife, she took me pots and pannikins!

She stayed all night! Oh what a sight – where d’ya think I found her?
In the back of the pub with her skirts clewed up and 20 men around her!

So later in life I married a wife, but damnit she was lazy!
She couldn’t cook, she wouldn’t clean, she damn near drove me crazy!

Now once I lived in Ireland, digging turf and praties.*
But now I’m on a whaling ship, pulling on the braces!

Saint Patrick was a gentleman. He came from decent people.
He built a church in Dublin town and on it put a steeple.

I’m proud to be an Irishman, it is me lot in life, ya know.
So I’ll drink a stout of whisky until the heavens I do go! 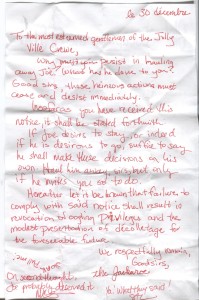 1 thought on “Haul Away Joe”