This is a jolly piece often requested.  Rick tells me that the origins of this ditty is with Henry Clay Work’s 1865 song “Ring The Bell, Watchman“, and the melody and general air was quickly adopted by sailors as is so often the case.  In this sailor’s form, Stan Hugill states that it was adapted to be a pumping chantey, and there are many variations of this such as “Click Go The Shears” and “Strike the Bell, Landlord.”  At sea, the end of a watch was signaled when the ship’s bell was struck 8 times, which fell at midnight/noon, 8 (am/pm), and 4 (am/pm); the end of your watch meant that you could go below and try to get dry/warm/some sleep while the next watch took over on deck.  8 bells could also signify the metaphoric end of your watch in this life, meaning you had expired, but not in this case herein. 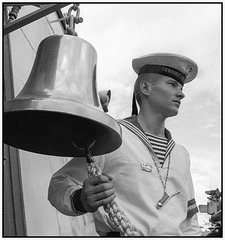 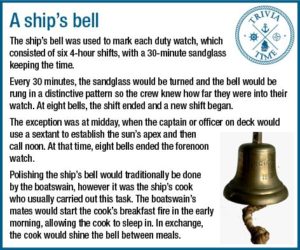 Down on the main deck and workin’ at the pumps,
There is the larboard watch just longing for their bunks;
Look out to windward, you can see a great swell,
And we wish that you would hurry up and strike, strike the bell

Forward on the forecastle head and keepin’ sharp lookout,
The yonder-John is standin’, a-longin’ fer to shout,
Lights’ a-burnin’ bright sir and everything is well,
And he’s wishin’ that the second mate would strike, strike the bell.

Aft at the wheelhouse old Anderson stands,  (or whatever name you wish to use)
Graspin’ at the helm with his frostbitten hands,
Lookin’ at the compass through the course is clear as hell
And he’s wishin’ that the second mate would strike, strike the bell.

Aft on the poop deck our gallant captain stands,
Lookin’ out to windward with a spyglass in his hand,
What he is a-thinkin’ of we know very well,
He’s thinkin’ more of shortenin’ sail than strikin’ the bell.