Traditional English drinking song with origins dating back to the late 17th century and made popular again by the Copper Family, where they call it by its traditional name – “Thousand or More”.  Bright Phoebus, as I understand it, refers to one of the original titans in Greek mythology and is an oblique reference to the rising moon at the glooming.  In the style of Pleasant and Delightful, the second line becomes the chorus; you sing the second phrase three times and then finish with the whole of the second line.  New verses were composed and added by Danny Spooner and Joseph Morneault, June 2013. 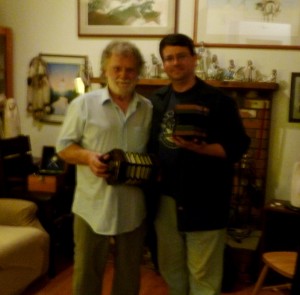 Danny Spooner and Jos. Morneault – June 2013. The picture is a bit hazy but the memory is not!

Here’s a video of the current generations of the Copper Family singing this wonderful, full song.

Our life passes on so cheerful and gay,
Since we found a new song to drive sorrow a-way.

Come see we bold sailors as we frolic and play,
Since we all has full bumpers, we was paid off today.

Although I’m not rich and neither am I poor,
I’m as happy as those what has thousands in store.

So here’s a health to all sailors and God keep ’em free,
From all the dangers of the oceans where they oftimes must be.

*Phoebus was a familiar name for the Greco-Roman god of the sun Apollo.