This song was well associated with Cliff’s repertoire but in recent years it has been adopted by Tim.  It explains an age-old question few are willing to openly inquire of, and accomplishes it in such pleasing melodious tones!  I understand that the verse had been in a flurry of speed by the poet Henry Lawson (c. 1910) as a means on the spot to trade for a few more drinks at the bar, and set to the 1866 hymn melody by Samuel John Stone “The Church’s One Foundation”… FYI, this hymn also inspired Rudyard Kipling for his 1896 poem “Hymn Before Action”. At any rate, the lyrics set below are a version, the song being altered by the singer presenting and it has been difficult to ascertain what lyrics were exactly the first. 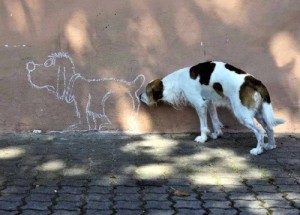 One dog was not invited
And this aroused his ire
He burst into the meeting place
And loudly shouted, ´Fire!´
Now the dogs were so excited
They had no time to look
And each one took an arsehole
From off the nearest hook 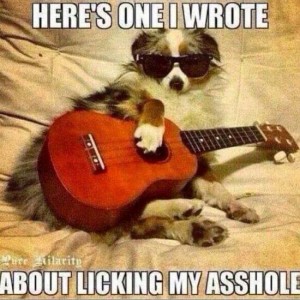 4 thoughts on “The Dogs Were Having A Party”