This wonderful song was composed by Ian Robb and released on his 1985 Folk Legacy LP of Rose and Crown, now available on CD.  Cliff has been singing this for years and years – the words below are how Cliff sings it and are marginally different from Ian’s original – and is a staple of the local sing-along circles in lower New England.

What has become of the old Rose and Crown?
The Ship, the King’s Arms, and the World Upside Down.
For oak, brass, and leather, and a pint of the best
Fade away like the sun as it sinks in the west.

Good friends, gather round and I’ll tell you a tale.
It’s a story well known to all lovers of ale.
The old English pub, once a man’s second home
Has been decked out by brewers in plastic and chrome.

The old oaken bar where the pumps filled your glass
Gives way to Formica and tanks full of gas.
And the landlord behind, once a man of good cheer
Just mumbles the price as he hands you your beer.

And where are the friends who would meet for a jar,
Or a good game of darts in the old public bar?
Well the dartboard is gone, in its place is a thing
Where you pull on the handle and lose all your tin.

But the worst of it all’s what they’ve done to the beer.
For their shandies and lagers will make you feel queer.
For an arm and a leg, they will fill up your glass
With a half and half mixture of ullage and gas.

So come all you good people who like to sup ale
Here’s hope to a happier end to my tale
For there’s nothing can fill a man’s heart with more cheer
Than to sit in a pub with a pint of good beer. 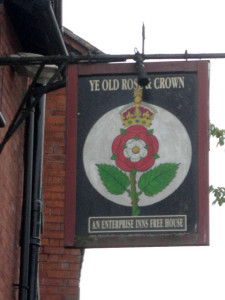