Despite the title, the song is actually about a naval ship come into port and accepting on board the prostitutes that would pile into bumboats by the shore and piloted by a “waterman” to crowd the recently arrived vessel and seek entry to ply their trade.  Technically, such “women of negotiable affection” weren’t allowed on formal Navy vessels, so they would proclaim the accepted fallacy of “coming to visit her husband”, which wasn’t “illegal” and typically indulged.  Yes, the officers knew what was about, but face and form had to be kept to a certain measure!  But to avoid things getting out of hand, these ladies would not be allowed to bring “liquors or spirits” on board, yet the searching of the bumboat was often desultory, someone might be paid off, and certainly the ladies knew that it was a rare chance that someone would actually look under her skirts for wine-skin bladders containing the desired beverages!  What debauchery that follows is exactly as you would expect… 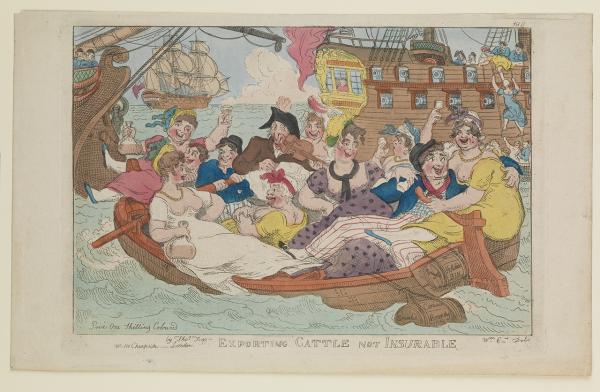 This song is collected from the 1777-1779 manuscript of Timothy Connor.  Connor was a seaman aboard the privateer brigantine Rising States was she was captured by the British H.M.S. Terrible 15 April 1777 in the English Channel.  The surviving crew was brought into England and placed in Forton Prison, Portsmouth.  There, for two years imprisonment, Connor sought to assuage his boredom by collecting songs that were sung by other prisoners, guards, and suppliers to the prison; he jotted them down in a book which returned to Massachusetts with Connor when released.  The songs contain no melodies and it requires some effort to find the songs in other collections for the associated tune, or one can fit a melody from the era to a song, or, as was not uncommon in that era, compose a melody of one’s own. Here, Connor wrote down the song with the title “A Man of Wars Song” and added the number “56” as the 56th song in his collection; the musicologist George G. Carey observes that this is older than the date it was collected and likely came from a printed source, and while I agree that it is older than the date it was collected, what Connor has written down has all the hallmarks of he writing down what was being sung/dictated to him.  Connor seems to have written down the songs as they were sung to him and so the metre is sometimes awkward and words are written as understood upon hearing or sometimes seem to be missing.  However, in the “folk process”, we have learned to compensate for this.  Here, I have done some very minor tweaking and then added a refrain for the purpose of including others when sung in the appropriate setting. 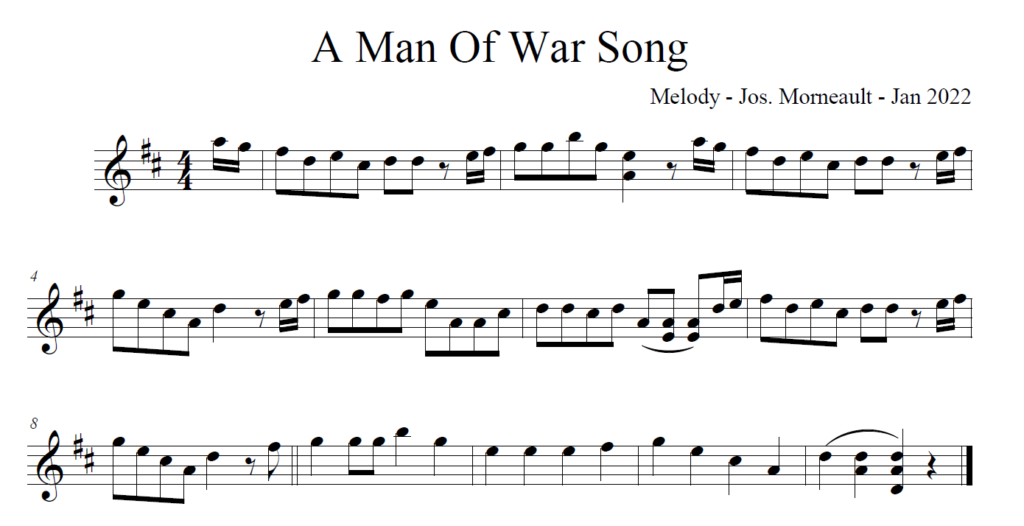 2. Then up steps a nimble jack tar, he hearing what was said,
Aft to the quarter deck he goes, and he humbly bows his head.
“Sir, my wife, she’s along-side, will you please to let her in?”
“Why, yes, my lad,” the lieutenant says, “But see she’s got no gin.”

3. “My wife she never carries any.” “You scoundrels, I won’t take your word.”
“Midshipman Jones, you search that boat, before she comes on board.”
Then up the side she comes, and down the bay she runs;
It’s ten to one to me, she’s a bladder or two of rum.

4. Then down steps nimble jack tar; “Jennie, have you got anything?”
With that she up with her smock tail; hauled out four bladders of gin!
“Come, I’ll go fetch some beer, that we may have some flip
“The devils may damn them for-ever, for we can sling them yet.”

*used for the rhyme rather than correct grammar.