A wonderful little trade propaganda song, and it can be found in the book “Victoria’s Inferno” (Jon Raven, editor) in which it is stated that the lyrics and tune was composed by David Shaw, a Forfar weaver; he composed the song in the 1840’s and he would perform it, “with other of his compositions, at trade and Chartist meetings during that period. Printed in ‘Vagabond Songs and Ballads of Scotland’ by Robert Ford, 1899 and 1901.”

It has been recorded in varying degrees of appropriateness from the Clancy Brothers’ more reasonable laid back performance – as I like it – to rocked up by folk groups that simply cannot help themselves.  The version I sing is as follows:  (I see it as 2/4 but at a slow speed of around 50 to 52 beats/measure) More of the original verses to be added later.  Can’t you just see the old men sitting around their pints musing on the importance of their trade, singing this song and from the heart?? 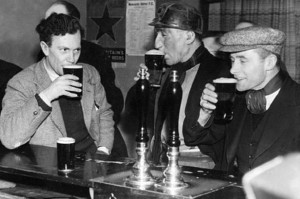 There’s soldiers and there’s sailors and glaziers and all
There’s doctors and there’s ministers and them that live by law
And our friends in South America, though them we never saw
But we know they wear the work of the wea-vers

There’s folk what’s independent of other tradesman work.
The women need no barbers and dykers** need no clerk
But none of them can do without a coat or a shirt
No, they cannot lack the work of the weavers.

Chorus: 2x
*talk or chat
**a Scottish term for a stonemason
***healthy

4 thoughts on “Work of the Weavers”