This coming Monday will the 14th – and that will be the 225th anniversary of the public storming of the prison La Bastille.  While it is indeed a French national holiday and celebrated by most Francophones around the world, it is also an event commemorating the freeing of those oppressed from those who abuse their power.  Vive la Liberté!  Come drink down some of the Gris’ wine selection… Even if we prefer beer and ale! 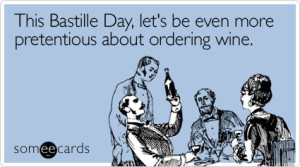 And today – the 11th of July, is the 216 anniversary of the REAL birthday for the United States Marine Corps by act of Congress and signed by then President John Adams, in order to man the newly built and launched ships for the new US Navy (1794 for the commencement of the ship building) to fight the French in what was to be known as the Quasi-War, and to fight the problems with the Barbary Pirates of the north coast of Africa; in both cases, our ships, men, and cargo were adversely affected until the brave and stout men of the US Navy and US Marine Corps handled the job!  The earlier Marines were Continental and individual states’ Marines, all of which had been disbanded at the conclusion of our War for Independence. 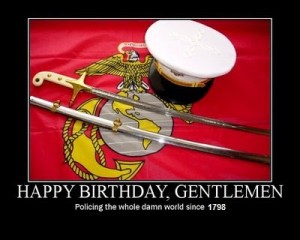